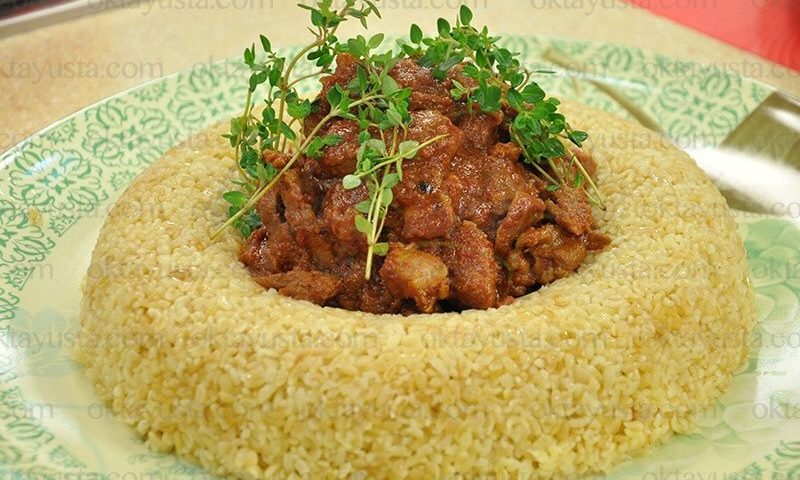 Azerbaijan has a very rich and delicious cuisine. Yet it is not very well promoted in the world and it is very difficult to find original Azerbaijani food somewhere in Europe or North America. However, if you are in Baku, don’t miss a chance to taste the country’s most delicious national dishes. You won’t be disappointed.

Azerbaijani cuisine is an intriguing blend of influences from many nations and countries, and yet it remained distinctive and unique. At the same time many foods that are indigenous to the country can now be seen in the cuisines of other neighboring cultures.

Below is a short list of ten most delicious dishes of Azerbaijani cuisine that you absolutely have to taste at least once:

It is a classic dish of rice and meat, sometimes flavoured with herbs and condiments. Similar dishes are common in many European, Asian and even African cuisines. But Azerbaijani pilaf is different. The three main components of local pilaf riсe covered with saffron, cinnamon and aromatic herbs; fried mutton, chicken, lamb or beef; and mixture of vegetables, greens and sometimes even dried fruits and chestnuts. However every household and restaurant has its very own variation of pilaf recipe in Azerbaijan which have just one common feature: all of them are super delicious. 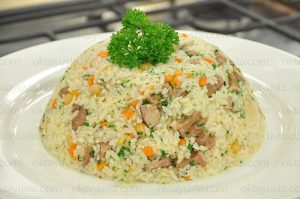 Similar meat dishes also very popular in a great region stretched from Middle East to Eastern Europe and South-East Asia. Azerbaijan has many types of kabab and shashlik. It is made from different kinds of marinated chopped or minced meat, chicken or fish, and vegetables, such as bell pepper, onion, mushroom and tomato. All this pinned on a skewer and fried over fire like a barbecue. However the taste is very different. When it prepared, kabab often served with lavas (slim sheets of unleavened bread), union and greens. 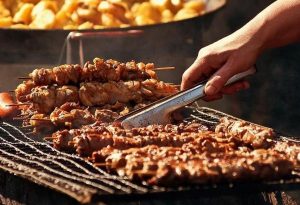 Qutab a sort of pancake with different stuffing. Different kinds of meat, spinach, cheese, pumpkin are among the most popular staffing. It wrapped into a thin layer of dough made of flour, water, eggs and salt, into a crescent-shaped form patties, and then the patties fried on both sides. Qutab usually served with herbed yoghurt, greens and sumac. Do you feel like tasting something unusual? Order yourself a qutab with camel meat, which are very common in Baku’s restaurants. 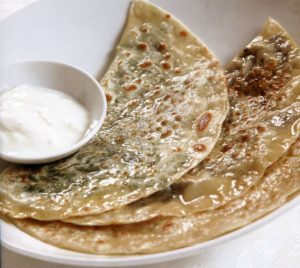 Dolma the traditional recipe of stuffed vegetables. You can find some similar dishes in many other countries. And yet, Azerbaijani recipe has its own peculiarities. Common vegetables to fill dolma include tomato, pepper and aubergine. Moreover, dishes of vine or cabbage leaves wrapped around a filling are also called dolma. For stuffing Azerbaijanis use mixture of minces meat, rise, flavoured with mint, fennel and other local herbs. Sometimes dolma cooked in earthenware, which gives an additional scent to the dish.

Dovga a traditional Azerbaijani yoghurt soup cooked with a variety of herbs (coriander, dill, and others), rice and chickpeas. It served warm or cold depending on season. 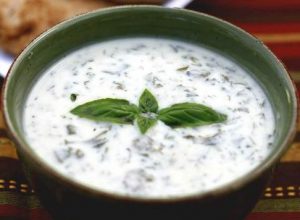 Kufta bozbash one more national soup. This soup made from meatballs, potatoes and peas boiled in broth with saffron and turmeric. The meatballs in the soup are large, hearty, and made of minced lamb and rice, sometimes with a zesty dried plum inside. Sometimes tomatoes and different herbs also added. 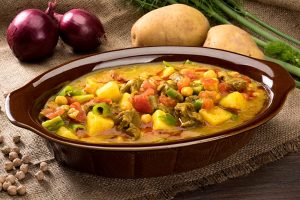 Lavangi  a casserole of chicken stuffed with walnuts and herbs. It comes from southern regions of Azerbaijan. But now it is quite common even in capital, Baku. 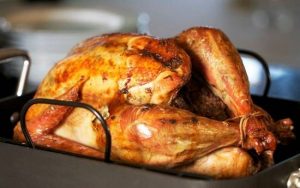 Dushbara a traditional Azerbaijani meal, a sort of dumplings of dough filled with ground meat and condiments. Similar stuffed dumplings are popular in many countries. But Azerbaijani version is quite tiny and served in broth.

Shekerbura one of the most well known desserts in Azerbaijan. It is a sweet patty, filled with ground almonds, hazelnuts, or walnuts mixed with sugar or honey. Sometimes, shekerbura prepared with various national ornaments put on it. 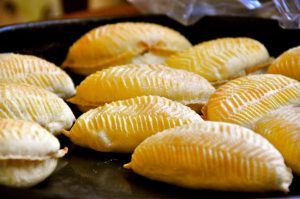 Pakhlava is another popular dessert. Several layers of very thin dough alternate layers of chopped nuts with honey to prepare this pastry. Pakhlava traditionally served as triangular pieces decorated with a nut in the center. Both desserts especially eaten at the Novruz spring holiday in March. 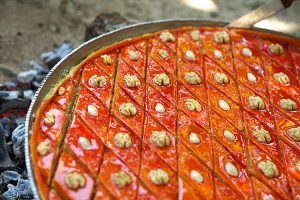 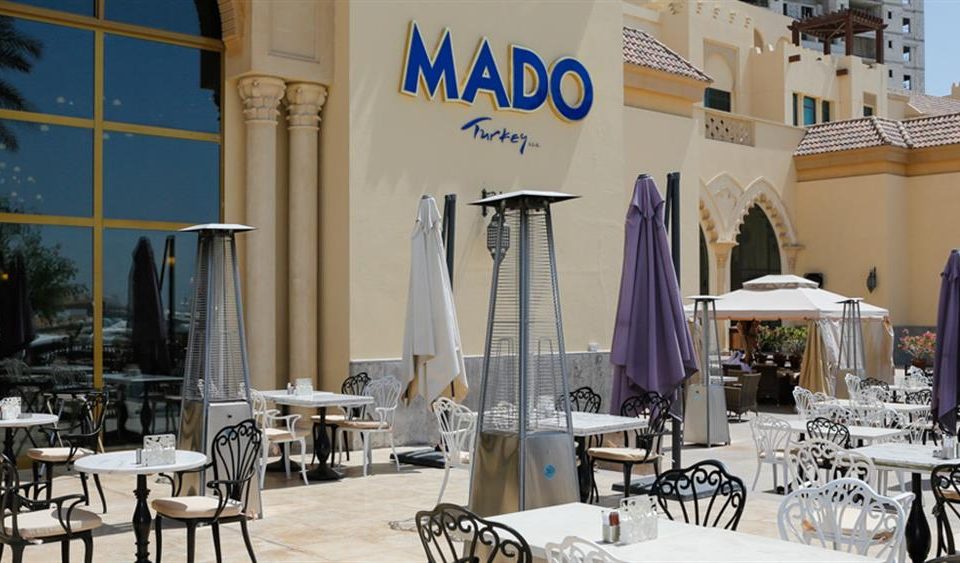