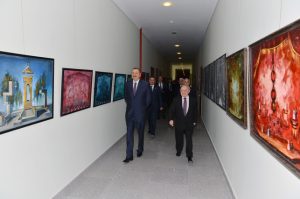 os Painting, Sculpture, and Architecture in St. Petersburg and Surikov State Academic Art Instute in Moscow. There wasa great need of highly educayed artists in the country.In August 1962 according to the resolution of the Cabinet of Ministers of the Azerbaijan Republic on “Improvement of the work of the Azerbaijan State Drama Instute after Mirzagha Aliyev”, a new art chair was opened under the Theatre Faculty, and already from 1963/64 academic year they started training specialists in the fields of “Decorative – Applied Arts”.

In 1982 on the basis of the newly- founded Art department the first entrance examinations weree held. For many years masters of painting and sculpture who had devoted themselves  to Art and had beeen rep[resenting our country abroad on a high level, hadbeen looking forward to the opening of a University in Azerbaijan which would train young highly educated artists. Their dream wasrealized by our National Leader Heydar Aliyev who valued Art and Artists, and showed great concern for them. This event came tobe a new page in cultural life of the country.  It laid the foundation for the modern development of our traditionally rich national Art.  At present  Academy with great creative and intellectual potential, thereare 12 People`s  Artists, 3Honoured Architects, 2Honoured Culture Workers, …academicians, 22 Candidates of Sciences, 5 Doctors of Sciences and 55 associate professors.