Teaching  of foreign languages at the higher educational establishments in Azerbaijan began in 20s of last century. And independent 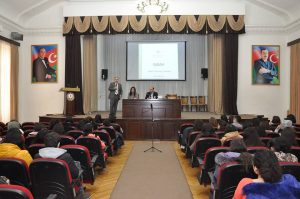 Thereare 7 schools, 25 departments at the university, a lot of scientific centers, laboratories activate at present. During a short time the number of the students increased from 3000 to 7000. Permanent Dissertation Council activates on 4 specialties at the University. ” German languages”, “World Literature”, “Theoretical methodic of education and teaching”, “Comparative historic and comparative –typological

Azerbaijan University of Languages that quickly reacts to the reforms in educational system of the Republic passd to the credit education system for the first time among the state higher educational establishments. Center for “Maintenance of the quality” in the frame of project of Tempus for the purpose to keep maintenance of the quality  in the focus of attention. To make tight partnership with foreign partners ws established. Relations with advancd universities of the world ar expanded day by day.